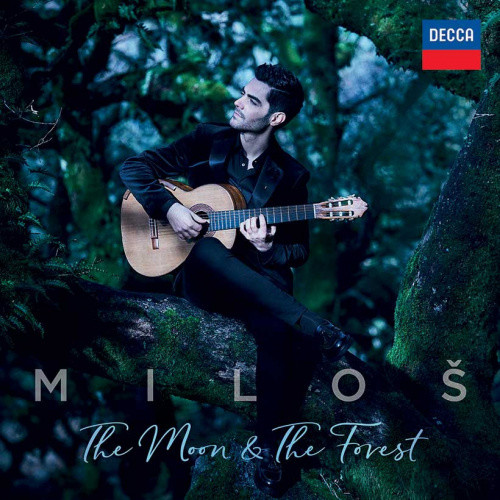 MILOŠ Releases 'The Moon & The Forest'

The Moon & The Forest, a brand new album from MILOŠ on Decca Classics was released April 30, and includes a premiere recording of guitar concerto Ink Dark Moon by Joby Talbot.

Ink Dark Moon by Talbot received its world premiere at the Royal Albert Hall, London as part of the 2018 BBC Proms, performed by MILOŠ with the BBC Symphony Orchestra conducted by Alexander Vedernikov on 2nd August 2018.

The dramatic orchestration and guitar writing of Ink Dark Moon aim to challenge the perceived notion of what a guitar concerto can and should be. The piece showcases a wealth of influences, shared between gentle, minimalist harmonies, edgy Balkan-inspired dance themes and Talbot’s own characteristically relentless rhythmic propulsions. Taking its title from a collection of Japanese love poetry, the concerto very much places the guitar – and its soloist – at the very centre of proceedings. Cast in three movements that flow into one another, changes in mood and atmospheric timbre permeate the work, exploring sonorous landscapes that bring the vivid imagery to life.

Miloš Karadaglić, known just by his mononym MILOŠ is a Deutsche Grammophon/Mercury Classics recording artist from Montenegro and widely regarded as one of the foremost classical guitarists of his generation. MILOŠ remarks, “Ink Dark Moon is like a perfect symphony - there is no element of delicacy or virtuosity left untouched. Joby loves the guitar- he celebrates it and envelops its delicate voice with veils of sound and colour. The full power of the orchestration and guitar writing in the third movement breaks the glass ceiling of possibilities.”